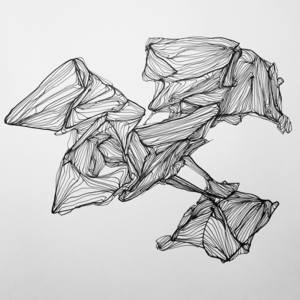 Kyle Wilmoth is a man of quiet repose and humble demeanor. He shies from attention and prefers to observe from a distance. His thoughtful and stimulating art work reflects an inner turmoil that few realize lurks below the surface, like the ever present tension necessary for the beautiful expression of a string instrument.
Intricate line work, the interaction of light and shadow, and fine attention to every detail reveal the depth of hidden sculpted bodies of work reminiscent of driftwood or ancient fossilized forms made visible now in ink or graphite.
Trained as an architect, Kyle chose a pursuit of knowledge, language, and wisdom rather than a traditional desk job. Working for years in the depths of the now defunct Labyrinth Books, he honed his knowledge of the Western Canon while exploring contemporary philosophy. This exploration led him down secret and guarded paths, and tripped in him an insatiable hunger for knowledge and control of his own mind. As he began meditating daily, his quest for knowledge turned toward the esoteric.
Countless hours he spent reading great- and obscure- Occult texts and diagrams. During this time, he also became a scholar of the literary giant Samuel Beckett. The aim of Beckett in his work to “drill one hole after another into [language] until that which lurks behind, be it something or nothing, starts seeping through…” inspired this artist’s desire to move beyond representation and metaphor. As he worked in various modes, the careful and deliberate search for a method to reveal the true nature of things became an obsession that he shared with Beckett.
In his daily life, his piercing and steady eyes work everything over. No object is too small, mundane, or worthless to ignore. He finds inspiration in the crumpled tissue carelessly discarded on the city sidewalk, or the abandoned carcass of a cicada. This mantra was most eloquently recorded by Da Vinci: “…if you look at some old wall covered with dirt, or the odd appearance of some streaked stones, you may discover several things… Out of this confused mass of objects, the mind will be furnished with an abundance of designs and subjects, perfectly new.”
Kyle’s carefully crafted paintings and drawings are immersive. The viewer is invited to trace the forms, to explore the depths, to forget self in the flux-like forms that hook and hold the eyes.