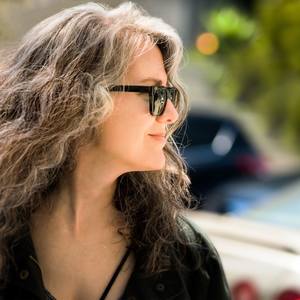 As a self-taught painter, Letchinger’s style has largely developed from a practice steeped in experimentation and intuition. What interests her most is ongoing connection with the creative energy that informs all inspired human activity, whatever that activity may be, and she's found this to be most successfully realized when approaching the studio with an “empty mind.” Working without a set plan, she responds to the moment with an openness to change, nuanced marks and expanses of color that tend to have notes reminiscent of abstract expressionist painters such as Joan Mitchell, Helen Frankenthaler and Cy Twombly.
Through this process, a textured, layered and edgy urban aesthetic often emerges -- an inevitable result of the graffiti and street art she readily absorbed during her time working, biking and distance running throughout downtown Chicago and its various ungentrified neighborhoods in the early 1990’s. Organic shapes, freedom and movement are also indicative of Letchinger’s pieces, with an appreciation, at times, for bold graphical lines and forms, perhaps echoing her affinity for works by Christopher Wool and Robert Rauschenberg. Most of her paintings are mixed media, often made with acrylic, oil and collage. Additionally, she collaborates with mosaic arts nonprofit Piece by Piece, in Skid Row, Los Angeles, to produce large combination painting/mosaic artworks. As summarized by Letchinger, “creating is a fascinating place of relief, renewal, magic and surprise; it’s a very hopeful place and I like to think people can feel that energy in the paintings.”

Self-taught, I began making art when I was little. Drawings, cartoons, calligraphy . . . and countless chalk murals . . . were a huge part of my childhood in a small town outside of Chicago. One of the first memories I have of mark making was when I was very little and discovered piles of new white paper and freshly sharpened pencils in my grandparents’ attic. I vividly remember drawing a single crisp line across the vast emptiness of the paper, and for whatever reason, I loved everything about that. Still do.

I lived in the city (Chicago) for years, in Wicker Park before major gentrification, and soaked up graffiti almost every day while running and biking long distances. Layers of new vibrant colors over old fading compositions on top of even older brick buildings created a really fantastic visual; the energy and the unknown stories behind that resonated deeply. I biked home from work often between midnight and 2am in the wintertime, when streets were empty and the foundry I always rode by was fired up, throwing its intense glowing heat through the open dock and out into the snowy cold. Something about opposites playing off each other in general was extremely beautiful and inspiring. That imagery fueled the poetry I wrote at the time and I can definitely see its influence in the art I make now.

I began painting and selling work online in 2013. I’ve also been fortunate to have been represented by galleries in Houston and Los Angeles.

Sept 2019: The Other Art Fair Los Angeles at the Barker Hangar in Santa Monica, CA

March 2019: Selected as one of nine "Fair Favorites" artists by Rebecca Wilson, Global Selection Committee member, for The Other Art Fair, Los Angeles