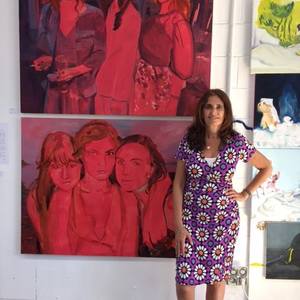 I was born in Paris, where I am still living and working at the moment. I was raised in the artistic community, as my father was a gallery owner and my mother a photographer.

I studied graphic design and worked in an advertising company as an art director for fifteen years. My life as a painter begun relatively late, I started practicing at the age of thirty-four at the « Ateliers Beaux-Arts de la Ville de Paris ». After a couple years, I ended my career as a graphic designer in order to fully devote myself to painting.

My work has evolved considerably throughout the years. My interest in portraiture have oriented my paintings towards a variety of themes. My original productions were mainly nude portraits inspired by Francis Bacon and Lucien Freud; in which I attempted to depict the human body and explore the issues of physicality and the individual character.

My paintings have been sold through my own network and displayed internationally in private households and in several shows.

In 2014, I decided to extend my artistic and pictorial education in order to study ancient techniques such as oil on canvas. However, this decision was primarily driven by my desire to learn theoretical concepts of history of art and introduce a more conceptual approach to my craft.

Today, my work is still about people. Through social networks I appropriate myself unknown images, in which, I transpose the personalities of my childhood; constructing a contemporary portrait gallery.

In my new series, I investigate the consumerist and narcissistic diffusion of photography and address Sontag’s ‘chronic voyeuristic relation’ in meta-pictorial paintings.