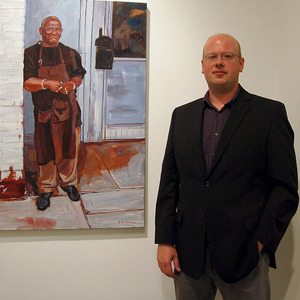 Andrew Barthelmes was born in Peekskill, NY in 1974.
He received his BFA from the School of Visual Arts in 1996.

After graduating he continued to live in various
New York City neighborhoods. He became captivated
by the relationship between people and the urban
landscape, and this continues to be the main focus
of his paintings. In 2002 he returned to Peekskill,
where he lives and works. He has been in several
group and solo shows in the New York area.

Our relationship to the urban landscape
fascinates me on many levels. One aspect is
the isolation of the human condition against
the backdrop of the city. Every building tells a
story through its condition. Like people, there
is a cycle within cities: reinvention, building,
and rebuilding. It is the intersection of these
themes that I try to capture in my paintings.