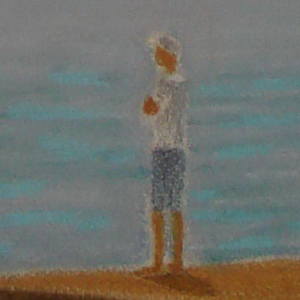 In the early 90s, he became interested in modern art technologies and electronic music.

Since 2003, he has been active in the St. Petersburg public organization of cultural programs “Happiness Corporation”.

Member of the Union of Artists of Russia since 2013, graphics section.

Works are in private collections in Russia, USA, Germany and Norway.

Essay by Andrei Khlobystin for the exhibition Midgard by Denis Oding, 2012

A breath-taking beautiful world of Norwegian fiords and mountains froze up forever in Midgard series by St.Peterburg artist Denis Oding. Denis’s coloristic talent and his meditative attitude allowed achieving monumental sounding of deserted landscapes where you can feel real attendance of Scandinavian Gods and Heroes in refined technique of the pastel on paper.
A trip in “few hundred kilometers through waterfalls land in thick of golden autumn, up hill and down dale, along banks of numerous rivers, lakes and sea fiords” became a breakthrough for him: he “has seen the most beautiful landscapes in my life” and has heard a new mythological sounding of his surname. “One day I made a voyage along the fiord, - said the artist. – All travelling was as into a fog. Sometimes it was deeper and turned into clouds, sometimes it dispelled a little. From the hailing distance all colors have being stayed bright, but according to removal they have faded, and they have interfused in a grey boiling mirage, where you could not separate water and heaven, stones and trees, morning and afternoon. I remember sunbeam breaking fog and clouds. It is a wonderful place for dreams, where all things arise from nothing and then they turn to nothing again”. Midgard is a “middle land” from Scandinavian sagas, and it is also a world of people from Poetic Edda acquired a new lyrical, menacing and elevated sounding in Denis’ works.
Oding uses art as an instrument for receiving magical knowledge – a symbolic instance of self-observation established on intuition and imagination. From the one hand special lessons of cognitive painting taken in youth play role here. And from the other hand in Odings’ art you can feel a spirit of his first art group “Sun specks” (also included Oleg Nazarov and Alexander Shtein) and their mysterious works with its magical world perception turned in 1990s to work with electronic music.
A dream of paradise made flesh in the yearn of northern European artist about Greece and Italy in XX century have assumed a new orientation – “North” which is heard in Edward Grieg music for the first time. Odings’ works are embedded into Scandinavian myth of Russian culture started from the summoning of the Varangians and refracted in the revolt of 14 graduates of Academy of Fine Arts who would become The Wanderers (Peredvizhniki) and give up from creation any works about “the bowl of Odin in Valhalla” in 1863, in works of Nicholas Roerich, in poetry of Alexander Blok and the cult of “Thule land”, nowadays become again important for Russian creative intelligentsia. A pilgrimage to the Lærdal district, where the highest Sognefjord in the world is located, started: in recent years many famous St. Petersburg artists Olga Tobreluts, Andrei Medvedev, Oleg Kotelnikov, Sergei Klimov, Marat Murakaev and others departed there for inspiration. Cultural interaction of Scandinavia and Russia and their natural mutual interest especially perceptible in the Northern capital – St. Petersburg, because of its territory and nature falling into Scandinavian areal, which appears in the Norman theory of St.Petersburg University and has ancient founding from the Scythian (see Tamara T. Rais. The Scythians. Builders of Steppe Pyramid. 2003). This year when 1150-years anniversary from the summoning of the Varangians (in 862 Rurik “set” in Staraya Ladoga) and the foundation of Russian Statehood, so the exhibition of sophisticated and epic Norman works by Denis Oding seems as symbolic and cultural significant event for us.