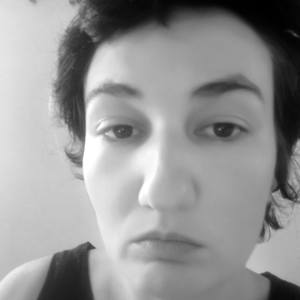 My works are representations, reconstructions of people living on the periphery of society made of things thrown away and a reflection on certain spiritual, mental anomalies beyond the signs of today’s existential crisis (e. g. everybody on the subway is fiddling constantly with his mobile phone): the increasing alienation and atomization of consumer society (a sombre, obsessive worshipping of high-tech instead of conversation, reading or contemplation), it becoming uniform, and today’s oppressing technical fetishism, pervading everything.

Through the recycling of trash, the combination of glued and painted elements I represent iconic scenes of poverty and high-tech fetishism, and I create bizarre human figures (statues) made of trash.

I also use “found” motives as a basic layer of my paintings: e g. some elementary, instinctive drawings (painted figures) of small children in contrast to the mannered figures put in the foreground, referring thus to the instinctive, elementary wholeness of individuals in their childhood, in contrast to the general “brokenness” of adult people (in Hungary). As a background I use for instance the maps of transport networks, that will, according to my expectation, well symbolize and represent the “tissue” of my figures and of human fates and life’s journeys in general.

My method of creation is based in a technical sense on erecting problems, obstacles and limits and trying to overcome them. By following and examining art history I try to reach the quality of my examples. That is, I sometimes try to paint with the simplicity and the abstraction of Mario Sironi, to “evoke” his block-like figures in today’s urban environment, some other time admiring the creation of the Merz works of Kurt Switters I also try to construct half abstract relief paintings. But I could endlessly enumerate the works and artists influencing me. I strive for a multi-layer painting, therefore I appliqué everything on my paintings, sometimes I cover them with a net, and I build them further by painting them over. I am influenced by the scene-like compositions of Italian metaphysical painters and the moving figures of Francis Bacon too. My figural view suggests a sense of life of the 21st century, where I try to aestheticize as little as possible.

I studied graphic design from 1994 till 1996 in Liceo de Arta Brasov (Arts High School), than later on from 1998 till 2004 at the Hungarian University of Fine Arts – my masters: Joseph Gaal and Dora Maurer. In 2001 I received a four months longErasmus scholarship to study at the Accademia di Belle Arti,Brera / Milano at the reproduction artwork and lithography department. In 2002 I received another scholarship “Ludwig” which made possible to make a study tour to France, Spain, Portugal and Morocco. In 2004 I graduated from MKE painter and audiovisual education department. In 2006 I had a scholarship in Vienna, too. I has been living and working since 1997 in Budapest: