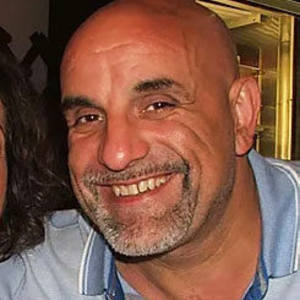 Hi I was born in Cardiff South Wales in the U.K.
I was born on January 1st 1965 and grew up in Aberdare South Wales.

I went to to boarding school at LLanarth Court in Raglan, Abergavenny and then Belmont Abbey in Hereford.

I feel I have grown up as a proud Welsh/Italian with the advantage of learning two cultures that of the the the Uk / Wales and Italy the birth place of my parents and grand parents.

My family and my wife's were immigrants whose parents who like myself who worked and have lived in the UK for many years.

My Father worked in the Ice cream trade and opened Polo Ices Ice cream Factory and hence from that we have opened other businesses inthe area.
My wife's family settled in Edinburgh and my wifes father with his partners opened the famous "Valvona and Crolla" Delicatessen.

At school I played football and rugby which fueled my love of all sports.

The influence in my paintings leans strongly towards my love of italy and Britain and italian and British Sport.

After school I went to art college in Cardiff and then went into Graphic design for many years in Cardiff.
I also worked as a Web Designer in Ferrara Italy and the UK.

I also sold cartoons and caricatures with Football Italia magazine during the 1990s, where the C4 TV channel
had a programme interlinked with the magazine.

I have also always painted over the years and sold my work privately.
I have recently started to sell my work online hence the recent venture on Saatchi.com