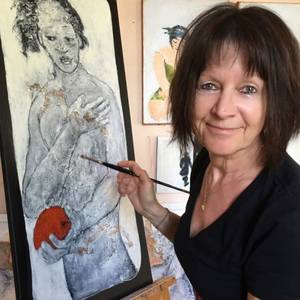 I was born in the USSR of the pre-Perestroika era in Moscow where I have received my first degree in Teaching English. I have left Russia and lived in the United Kingdom, the Netherlands, Switzerland and France. I have received my second degree in Humanities from the UK Open University.
I have spent three years scetching nudes at the Atelier de l'Academy in Ferney-Voltair, France and also studing water color techniques with Matre Alain Gegouts.
I have travelled extensively throughout Europe, Asia and the United States: the sum of my life experience, my studies and travelling provides me with an inexhaustible well of inspiration for creative work in painting and writing.
I have exhibited my work individually, as well as a participant of collective exhibitions in France, Switzerland, Italy and the UK: the detailed list of the exhibitions is on my website: http://www.yelenalewis.com
I work in different mediums on various supports and love experimenting and designing my own approaches and styles.
You can see examples of my work on my website: http://www.yelenalewis.com , on Yelena Lewis page on Facebook: https://www.facebook.com/Yelena-Lewis-
224541213706/

You can reach me at creep_easy@yahoo.co.uk