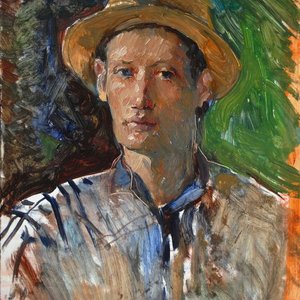 Anton Pronenko, born November 30thof 1986 in Ukraine with a natural pictorial talent, started communicating visually precociously, even before learning how to write at the tender age of 3 years old.With the full support of his Art History loving mother at age 9 he decided to give Art tours at Kyiv Pechersk Lavra, or Kyiv Monastery of the Caves.By age thirteen his paintings had already earned him the right
to apprentice with his much older professional Fine Art painting peers. When a colorful parrot became his inseparable pet, it sparked on him a desire to draw from his imaginary world to design fashionable costumes.Furthering his newly found vocation for design at the T.G.Shevchenko Republican Art School since 2003 until his acceptance to the National Ukrainian Academy of Arts by 2006; he graduated in 2011 from the Academy with a specialization in Theater Decorations.Since then, sold out personal exhibitions in Kyiv, Ukraine, as well as in Prague, Czech Republic, annually validating the strength of his artistic talent. Highly in demand, his emerging Art work is now present in several private collections in countries like Holland, the United Arab Emirates, the Czech Republic, as well as in his native Ukraine.