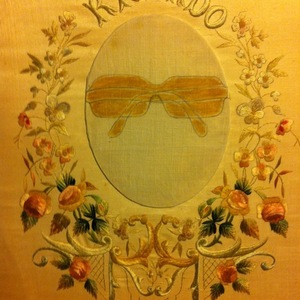 Ezio Minetti has kept something of his youthful experience in the world of fashion: the enjoyment for objects and a tactile pleasure for materials.
Everyday objects, that people often do not use anymore, but that still have an affective value, are transformed by Ezio into icons of memory.
So a dress of a doll (that you can't see, but that you can imagine from the sign it leaves on the canva), becomes a symbol of a female universe that is playful but also temptative.
If a poetry of objects is present, it is absolutely casual and temporary, not researched at all costs.
Really it is something that stands in the middle; the artist realizes his sensibility in the objects that casually ( but how much casually?) stands in front of him.So the object brings within itself an idea, an emotion, an affective pulsion.
Once you "meet" the object, here is the rubbing, the use of a material that is its opposite, like an anti-rust on a linen blouse, to create a change in the name of the absolute, where only temporariness was present just an instant before.
Trying to stop the moment! To do this, a sensual use of matter is necessary, where the object is torn from everyday life, and it is brought outside the temporary dimension.
Making the object HIS OWN , the artist chooses a particular object( as a personal sign) like a pair of glasses. He likes it instinctively, and draws it several times on different materials, like old papers gone yellow by time and memory. More recently an unscrupolous use of matter and colour has been made: the result is a ceramics pair of glasses, where the violence of matter is opposite to the primitive seriousness of the object, or macro glasses drawn on a white background that suggest an idea of seeing-not seeing and the mean is the real message.
Like the pink heart-shape glasses of the film "Lolita", by Kubrick ,were an instrument of seduction, the glasses created by Ezio represent the concept of "reading-not reading" a much more changing and ambiguous reality.
Glasses like a metaphor, as a mean of knowledge, open to doubts, which are the base of human fairy tale, or (as a society observer says), the "liquid society" into which we are immersed.