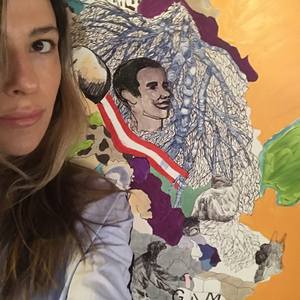 My approach to art is based on using different media such as painting and performance. Since the beginning my painting has evolved in cycles, in which drawing - in its most classical sense - is at the base. The themes are media and everyday images, events that marked me, autobiographical stories, visions of memory, which materialise in surreal representations suspended in the canvas' space. I do not pursue realistic goals, rather I try to transfigure by creating a mix of drawing and colour, yet keeping a direct link with reality. Over time the representation has become synthetic and two-dimensional; using the canvas as a white surface on which compositions stand out centrally, I have triggered off a brainstorming of “cluster” shapes. The colour range has strong and synthetic tones thanks to various media including enamels, textured and glossy tools and water markers. The subjects are human figures, animals, objects, landscapes, food, naturalistic forms, herbaceous plants in the form of ropes, waves and liquid drips, that become the corpus of work through the stratification of three levels. The first level consists of the pen drawing to delineate the perimeters; the second of intangible chromatic backgrounds made of particularly transparent Japanese water markers; the last level, the more material, is made of oil and collage to define volumes, geometric forms, architectures.
Assuming that there is not one concept of truth in this storytelling, I do not express any judgments, but visions. I take and depict the world as a polyphonic chaos. Sometimes there is drama, but at the end of the turmoil, that creation is for me, in every painting there is a kind of redemption, which redeems me (and the world) carrying a happy ending, e.g.: waves, herbaceous plants, drippings. Alongside the pictorial work develops the performative, related initially to the use of photography and the need to interact with the city, even by resorting to fiction if necessary. The interest in landscape photography and its mutations has characterised my beginnings, when with an analogical reflex camera, I captured historic places, abandoned places and functional spaces such as stations, airports, shopping malls, which Augé defined in the 90s as non-places. The stay in the city of Berlin, the strong contradictions between what modern architecture symbolises and what it really means living in it, the void of identity that I felt, motivated me to document emblematic places whether for historical value or its cancellation. The urban space, the relationship between body and technology, the artificial landscape, the media communication, an inside, which is human, against an outside increasingly complex are themes that have inspired several actions performed since 2001. The obsessive repetition of a violent act, a prolonged intake of food, the temporary occupation of a public space, the reading of secret laboratory research are performances I realised. These actions are authentic, there isn't any theatricality nor any critical intent, the aim is to transmit free messages providing a personal point of view and inducing emotional experience to share. Except for video recordings , there is no trace of these actions.