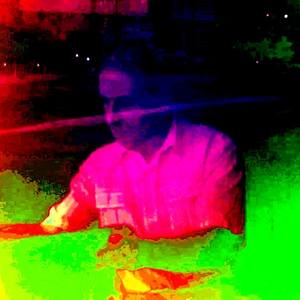 Roberto Oscar Gasperi (1953) is an artist who resides in Buenos Aires.
He makes it very clear in every piece of Art he creates that his favourite tools are "scissors, paper and glue". Yes, you guessed it correctly he creates collages. And what a prolific artist he is as well. His family must have a hard time negotiating all the scraps of paper he generates as a by-product of his collage making.

Roberto's collages take you into a surreal world. However, his surrealism is based on real world characters in a surreal or incongruous setting, such as football players in the desert with a saintly figure looking down on them, to a boat floating along a canyon or even a Queen's Guard standing to attention in a pastoral setting.

One can easily relate to all of Roberto's collages (compared to say some of the old world surrealism such as Dali) as his characters and settings are all contemporaneous. However, that is where you have to stop. It is difficult to fathom what is going on within Roberto's mind. Not being fluent in Spanish may make it a double jeopardy. However, this made it even more enjoyable for me as we can fill the pictures with our own fantasies. That is what creates the mystique around Roberto's collages.

His subjects take on an immense range and variety as well from Oriental Figures to Classical and Modern Architecture and from roadblocks made of giant fingers to astronauts. So have a great time dwelling on some of Roberto's Artwork here. Do not worry, when you are done here there is plenty more to keep you occupied for weeks in his Pages and Blogs. And in the end while you will have had a most enjoyable time, you will still not be any deeper into Roberto's mind.

Bon Voyage or as Roberto might say Buen Viaje.

Paul Maenhout:
Congratulations. I like your pictures very very very much. The surrealistic setup reminds me to famous painters as Rene Magritte and Salvador Dali. I do not understand why you get so few likes, this work belongs tot the very best on Youpic, maybe the best of all. A lot op people here have no own style, everyone copies from everyone. Your style is unique. I feel very curious again and again after the story that is hidden in every composition, every picture awakes my fantasy. This differs completely from the next boring flower or insect. +++

The favourite tools of Roberto Oscar Gasperi (born 1953), a Buenos Aires-based psychologist, are only scissors, paper and glue. His brand of surrealism does not slip into the fantastic but radiates an otherworldly effect through incongruous arrangements of everyday realistic objects.

A preoccupation with mental health is obvious – with many of Roberto’s collages displaying clocks, pills and tired human figures. Pre-Columbian artifacts, Classical sculptures, modern architecture, space exploration exist with references to Kafkaesque absurdity. Additionally, there are interesting meditations on the finite capacities of humankind and allusions to eternal life beyond the grave.

Roberto Oscar Gasperi studied at the universities of Buenos Aires and Belgrano. In 2013, four of his collages were exhibited at the International Exhibition of Painting and Photography in Torre Brance, Milan, Italy.
Published by Tulika Inez Bahadur.
https://onartandaesthetics.com/2017/02/15/an-art-of-scissors-paper-and-glue-by-roberto-oscar-gasperi/