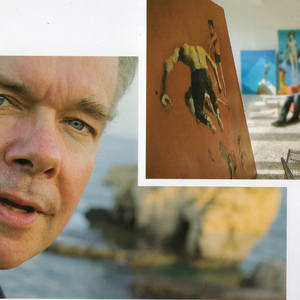 I have always been interested in moving subjects. In my landscape studies I like everything to be moving, water, foliage and sky. After learning to draw, the moving human body became my central theme firstly In the 1980s in my compositions of pedestrians in city architectures or punk musicians in urban spaces. Eureka moments occurred while watching divers dancing off the cliffs in Nice or viewing the Charles Atlas videos of Merce Cunningham dance pieces and from the 1990s I started directly working with dancers and circus artists attempting to capture the moving body and in particular falling figures in jeopardy. Here I show two aspects of my work with one recent series and an older series painted in the 2000s. The more recent "orbital" series depicts apparently freely moving divers or circus artists spinning or falling in an electric yellow or universal blue space or over the horizon between sea and sky. The figures are organised geometrically like hieroglyphs or randomly recombined to form complex compositions.
In the second earlier "Fragments" series, falling figures are painted on canvas on balsa wood fragments in order to break up the background in different ways: they are falling together from or into a broken universe of ordered or chaotic fragments exposing a new or empty space behind.
A wider view of my work than presented here can be seen on my two websites www.nicholasstedman.com and www.gouachelandscapes.com. To view click the above small atlas symbol

I was born in the UK in 1953. Although I painted all through my teens under the guidance of my school art teacher the Scottish artist Nell Todd and at Cambridge University where I exhibited at Kings College and Kettles Yard, I actually had a scientific education. After graduation I considered retraining as an artist at a UK art school but instead decided to cross the channel to France. Here I did a PhD and worked as a biochemist while learning to draw in the Paris municipal art school in the Place des Vosges. In 1981 I stopped all my scientific work and completed my artistic education with the inspiring instruction on artist’s materials from Nicolas Wacker at the École des Beaux arts and two years of regularly work under the critical eye of the lyrical abstract artist Zao-Wou Ki at the École nationale supérieure des Arts Décoratifs. After spending a year in Rome I became a professional artist in 1982 and worked in Paris until 2004 when I moved to Sicily. I now live and work in Palermo