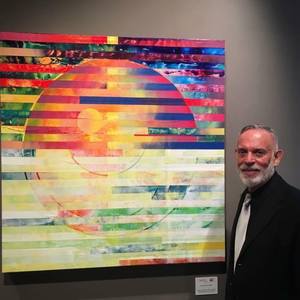 I've been a professional artist for the past 50 years. My paintings are mostly abstract using as a motive the different kinds of landscapes or atmosphere.

2017
Winner of the International Award Francisco Goya & Maestro Title at the 2da Bienal de Barcelona, España held at The European Museum of Modern Art of Barcelona, MEAM, from 7th of May, 2017.

Winner of the International Award Dante Alighieri at the Biennale D'Arte Peschiera Del Garda, at Verona, Italy. From March 31 to April 3, 2017 at historical Caserma dell'Artiglieria, the Curators of the Prize are Dr. Francesco Saverio Russo and Salvatore Russo.

2016
Finalist in the Artavita’s 21st Online Art Contest, Certificate of Excellence and invited to participate on the Artavita’s Pavilion at the New York Artexpo 2017, New York, USA, April 20-24, 2017

2003
The Puerto Rico Museum of Contemporary Art choose one of his paintings “Tribute to Malevitch” as part of their permanent collection.

1981
First Prize in Painting on the Sixth National Painting Saloon of the UNESCO, University of Puerto Rico Museum

1974
Honor Mention in Painting on the Second Contest of Painting and Printmaking of the United Federal Savings, Puerto Rico.

1973
Honor Mention in Painting on the First Contest of Painting and Printmaking of the United Federal Savings, Puerto Rico.
Selected by the Puertorrican Association of the UNESCO to represent Puerto Rico on the art exposition “Eleven Puertorrican Painters” at The Ibero Club at Bonn, Germany.

1969
First Prize in Painting at the Ateneo Puertorriqueño Chritsmas Festival

First Prize in Painting at the Association of Fine Art Students, University of Puerto Rico.