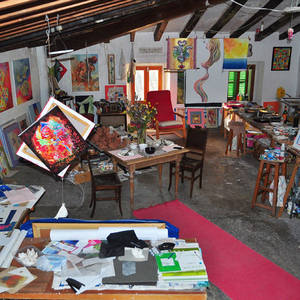 Miro de Vega is the artistic name used by Miroslav Vegh (born in Bratislava, on the 8th of October 1953), a multifacited artist, painter, photographer and sculptor of German nationality whom is presently living in Spain, Mallorca since the year 2000.
From a very early age Miro showed great interest in art and even as early as elementary school he participated in various artistic competitions in his native Bratislava. At the age of 16, he combined his studies in graphic arts, specializing in lithography, with helping to support and care for his family without ever abandoning his artistic interests and fulfilling them both professionally as well as in his private life.

When he was 21, within a fully fledged socialist state, Miro began working as a lithographer in several printing presses, and among which was the renowned Pravda newspaper. His need for freedom and his rebellious spirit led him to flee to the former German Democratic Republic (GDR) with barely any economic recourses and having to endure a journey full of difficulties and many adversities, leading him through the former Yugoslavia and Austria. It was in 1983 when Miro finally reached his destination, and two years later, after having mastered the German language, he resumed his work as a reprographist in various German cities such as Stuttgart, Ulm y Augsburg.

In 1999 he moved to the Balearic Islands, more precisely to Majorca and finally settled in the town of Selva, where he has rehabilitated a beautiful old ancestral house that is both his home and art studio. Since 1989 in Austria and mainly in Germany he had participated in numerous artistic exhibits and to his artistic curriculum, the various exhibitions carried out in different locations in Majorca must also be taken into account as well as becoming a member of “Asociación de Artistas Visuales de las Islas Baleares (AAVIB)” in the year 2001.

Miro de Vega’s personal creative style is clearly influenced by his own life experiences that where marked by a very difficult and deprived childhood, were he suffered from hunger and solitude while being forced to live in different orphanages and to suffer the absences of a father whom he never knew and a mother with severe health issues of Hungarian origin. In addition to these difficult circumstances, his condition as a refugee inevitably shaped his strong willed, perseverant and determined character and limitless creativity. The early practice of sports such as soccer or cycling have been and continues being absolutely determining in his daily strive to further fulfill his creative spirit. A great admirer of the Impressionists, although he has always felt a special predilection for Vincent Van Gogh. Miro de Vega always has a clear message in mind before creating, on occasions he uses photography, a technique he also dominates perfectly and practices also as another form of artistic expression.

As a self-taught artist, and due to the shortage of material which throughout his artistic trajectory he has had to accept, made him rely more on his own imagination and creativity and with great perseverance and belief in himself was able to master different techniques such as; oil painting, wax painting, watercolor, acrylics, mixed techniques, etc. In addition, he has created his own personal technique, devised and perfected throughout the years, and that he himself denominates as DdVvG (Discovery of Vincent Van Gogh), as a tribute to his greatly admired Dutch artist. This personal style could be well described as “rebellious” much like Van Gogh’s own style, and which is in constant and irremediable evolution towards the abstract. He is also a passionate sculptor and his work is mainly regarded due to the use of all type of recycled materials in their creation.