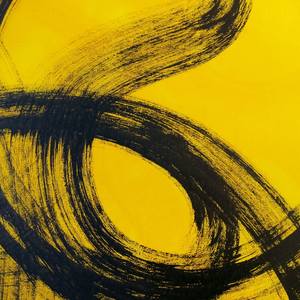 Cloony is a British abstract artist of Chinese Malaysian heritage.
She is influenced by Chinese tradition, Buddhism, Taoism as well as contemporary movements such as abstract expressionism.
Her paintings are very much informed by Eastern philosophies and practices - such as ancient traditions of calligraphy -and how these are related to deep concepts of energy, gestural markings and embodiment within the painting itself. This is what really informs much of Cloony's process and means that her works, rather than being traditional representations, or what we would normally understand as ‘abstract’ in the conventional sense - are indeed 'embodiments' themselves
She was initially influenced from her practice of Chinese calligraphy, which she had already began to study in the early nineties as a result from a profound practice in Tai Chi.
Cloony wanted to explore a non-linguistic expressionism using the art of calligraphy incorporating the essence of ancient philosophies in Taoism and Buddhism.
Cloony uses oversized Chinese calligraphic ink brushes to create a visible manifestation of moving energy from herself through the brush onto the paper, where each brush movement and breath are interconnected, underlying her root concept of interconnectedness and the seed that lies at the core of each piece. Such connections between Cloony’s Tai Chi practice and artistic production are clearly originated and echoed here in her work.
A Tai Chi practitioner's metaphor of a silk thread unravelling as the physical movements are practised, is intentionally replicated in the continuity of her brushstrokes. Entwined in everything she produces there is a deep philosophical element, a representation of the present moment with each mindful brushstroke - which once completed, is a reminder of impermanence and emptiness.
Producing pieces which are deeply rooted in the ancestry and artistic lineages of both east and west, which are placed upon a foundation – a personal inner landscape - comprised of her own unique amalgamation of spiritual practices and beliefs. Her work can be seen as a result of a meeting point between the lineages of Chinese calligraphic imagery and western abstract expressionist art - a third space.
Confining Cloony’s work within a strictly eastern philosophical or modern western abstract tradition would be misleading. Here is an artist doing both – in her own way.