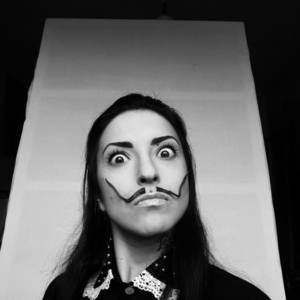 I work mainly in the field of painting, but also doing illustration and experimenting with ready-made objects and different types of interactive & new media. To be honest I use a wide range of materials such as acrylic, alkyd-based paint & sprays. Although my main medium are the oils most of the times I end up with mixed media.
Recently I started to deform canvases, the plain rectangular ones turned to be oppressingly boring. Thus I found myself hammering my own ones and not long enough there were the first ones –forms decomposed, they became sheer, striking, sharp glass parts, dashing into one another. It truly reminds me of the tides of life and people’s interactions. In fact nothing is square-framed, it is imperfect, with not-into-the-frames identity, casting luminosity, provoking, crazy, messy, rigorously illogical in going up and down. And absolutely real.

I easily get inspired by what surrounds me considering the urbanity quite of the biggest feature – why do people do this, how people feel, the big city itself with its small stories to tell. I like bright and saturated colours, expressive line and a statement topics.