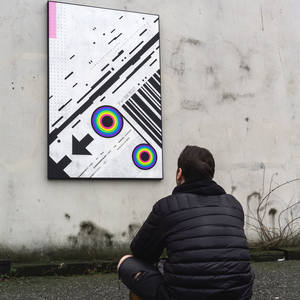 My artistic practice is an ongoing visual and conceptual experiment about the possible appearance of art in the future.
I was born in times with no personal computers, cell phones and Internet and I have been witnessing an overwhelming emergence of all those new things and most importantly the change in
human values and views.
Nowadays, we see the beginning of an absolutely new era of super advanced cybernetic technologies which will soon give birth to the General Artificial Intelligence. It will lead to a huge shift of our status as the most influential and highly complex creatures on this planet who always have treated themselves as a pinnacle of evolutionary creation.
It was once said “we can’t predict the future, but we can create it”. Therefore the attempt to create the art of the future is one of the obvious ways to possibly deal with an unbearable feeling of uncertainty about the role of art in the new world with different cultural values and maybe even with different views on beauty itself.

We can imagine what the art of the future would look like but if we don’t create it ourselves then it won’t be any. So my practice and big interest is not only to imagine and create something brand new but also to create the future itself by doing that.

My works are literally distilled and freed up from anything that is not an imaginary futuristic art. There is no intentions other than to fully abstract from my own previous visual experience and to generate some art which is totally new to me. Of course the elements used are mostly standard shapes but I try to combine them in the newest form possible.