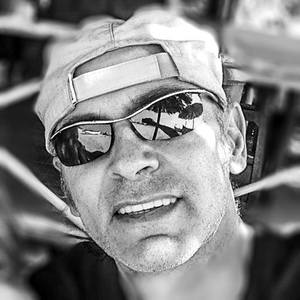 Andy Ridder is a photographer based in Cádiz/Spain.
After completing his studies at the Academy for Photographic Design in Munich, Andy Ridder worked as assistant in Stuttgart, Munich and Paris. Following that, he performed jobs for leading magazines and companies in Germany and abroad.

Andy Ridder uses partly dichromatic black-and-white photos in contrasting shades, created as free works, as a counterpoint to his commercial color photography. The locations are places in which human and space, in the interplay of light and shadow, are quite abandoned to the atmosphere and to the spontaneity of the moment. This can lead to unplanned enactments, as in the series in a Jazz Club published in “Stern” and “max”, in whose independent existences Andy Ridder intervenes as little as possible to control or manipulate. So a more subtle, hidden type of eroticism emerges, always just hinted at, which never ostensibly or even platitudinously pushes the viewer. The eroticism does try to involve the viewer, but it must be gradually discovered by them. This leaves just enough room for personal interpretation. “Stern” magazine writes: “Stuttgart-based photographer Andy Ridder’s pictures demonstrate subtly hidden eroticism to a high level. The dark atmosphere of a jazz club is the ideal setting for his sensitive interpretation of eroticism.” Excerpt from “max” magazine for pop culture and style: “Andy Ridders pictures are often preceded by unplanned enactments. Thus a subtle eroticism emerges which is only ever hinted at.”

In his abstract works, Andy Ridder works at the threshold between painting and photography, between reality and abstraction, going from conscious distortion to complete abstraction. The “Zeitwischer” series originated in a photographic process that used long exposure times offset with “proper motion” sequences, resulting in extraordinary new visual compositions, in which traces of the movement in his work in space and time can rediscovered. Acceleration, spatial effect, movement and dynamism together yield endless pictorial superimpositions. The flowing-time, moving camera destroys existing spatial forms through long exposure times. So new spaces and images emerge, and he succeeds in creating a subjective reality or images full of mystery ….

"Every act of creation is first a act of destruction.“ Pablo Picasso