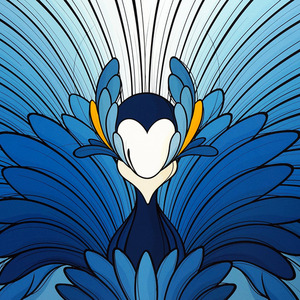 "Over the past several years, artist Arkiv Vilmansa's iconic character, "˜Arkiv Instant' has made the artist a household name within the lowbrow art
and toy culture scene. In his first U.S. solo exhibition, Through The Lines, Arkiv looks to develop his signature image, while debuting new
characters and continuing to explore his unique style of combining the surreal and theatrical with playful and whimsical caricature.

Through The Lines is the first exhibition to chronicle Arkiv's Vilmansa's career during the past several years of artistic growth and budding success.
As the title suggests, the exhibition is centralized on the theme of overcoming adversity or "rolling with the punches." Many of Vilmansa's
characters are seen embroiled in conflict, be it through physical restraint or combat. True to his technique, Vilmansa's deep and curvaceous lines
slice across each canvas, while radiant, harlequin waves sweep your eyes up and around the bodies of unusual, yet beautiful creatures. As a
result, Vilmansa has developed his portrayal of colorful fluidity and struggle and opposition. Through the lines marks a pivotal turning point in
Vilmansa's career, where past challenges are overcome and the process of moving forward begins.


Indonesian artist Arkiv has been painting, illustrating and designing cartoon like figures since 2005. Shortly after finishing his Bachelor degree in
Architecture he plunged into the art world citing his love for drawing figures as his inspiration for this change of career path. Arkiv had a strong
debut with his first vinyl figurine titled Arkiv Instant. After Arkiv Instant's large success, Vilmansa was presented with many exciting opportunities
including a redesign of Mickey Mouse for Disney Asia.

His description reflects the same silliness and complexity of his characters. Smiling cartoons flipping you the bird. Figures strangling each other.
Teddy bears hanging on a rope are just some of the oddities that Arkiv paints with cheery colors and his signature curvy and graphic style."