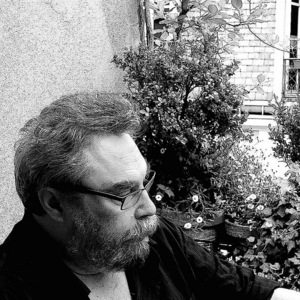 One day I wrote in one of my books: "nowadays that reality is linked equally with the visible, nothing exists outside of the image, and paintings no longer show the past or any other definition other than the Surfigurative"

I created the Surfigurative movement. To surfigure the past means maintaining it above the image itself by the true sign of its own destruction.

Painting the past involves creating the keys that help to unlock the representation. And that is why I paint scenes from the cinema, jazz musicians photographed in concert and women photographed in glossy magazines.

I only use oil pastels. The advantage of these is that it gives the stroke and colour simultaneously, recalling the process in my book, which, borrowed from the cinema, presents without transition, events that coincide with one another.

Just as my paintings coincide with the deja-vu.
To give it another aspe

Although founded in the 21st century, the "surfiguratif movement" rests upon a major event in the history of art: the invention of photography.

You may recall that following the creation of photography, painting did not only and curiously become maladroit, but little by little it also fell back on to its own specificity, and as a result, instead of being figurative it claimed to be abstract (from all representation).

God is dead! And the art of painting immediately lost its way. With a few exceptions, such as Courbet, who, in 1866 offered the world a glimpse into his origins: the female sex!

Photography was an unacceptable vision for the new Queen, which in the "light" of Freud and his discovery of the subliminal, was going to return this opening like the finger of a glove, and place scrutiny on the dictatorship of Phallus, with his erectile view and pointer which controlled all of photography. Reality was no longer seen as being linked to the creation of the visible and to the world of photographers, whether they were fixed or animated.

"When the constructed image, chosen by somebody else became the principal link between the individual and the world that he or she was previously looking at, the fact that the image can support everything is not evidently ignored"

And at such a point in France, at the end of the last century, the practice of undesirable, ordinary and non-circulated painting was declared, after the death of God and the end of this story. But who was benefiting from this crime? At the beginning: the real presence of objects in place of their representation made it impossible (banned by the Official Art) apart from "embellishing it with images" it, the photographer, the cinematographer and videographier ... It was at this point at the start of the 20th century, that Jacques Cauda, initiator of the surfiguratif movement, voiced his disapproval "Now that today, reality is in a strict relationship with the visible, he wrote, nothing exists outside of the image. Also painting would not known how to have any other purpose other than the past (photography,cinema) and other demands that question it"

-What would happen to painting if we only brushed over the things that coincide with its image?

-Does painting the "deja-vu" not come back to the point of maintaining it over the other images by the effective sign of its own dismantling?

- In painting, does the absence of artists not seem like a point that the spectator can just glide over, whereas photographers are never missing from photography which is proof of its almighty presence in which the spectator ends up stumbling against a wall

Such is the issue of surfiguratif art: restore an illustration to the world by the opening that makes the painting in this image that the real has taken as its single model, and that it has substituted itself for.

Photography is so much more beautiful when it is reinvented.