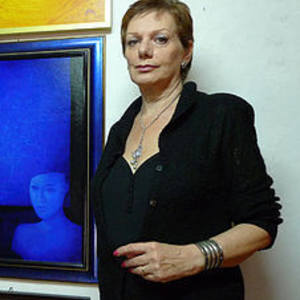 Cosetta Arzuffi was born in Zanica, Bergamo and is the daughter of art.
She approaches to painting very young, first under the guidance of his father Arturo, musician, then atelier paternal uncle Pasquale Arzuffi that directs the classical composition.
After the professional studies she attends figuratively drawing classes at the Marangoni Institute in Milan.
She continues her artistic training under the guidance of Luigi Arzuffi and the painter Piero Urbani.
She learned the art of engraving by the painter Ignazio Nicoli, also attended the ancient painting courses, painting and wood restoration.
Since 1970 she participates in the artistic life with personal and collective exhibitions both in Italy and abroad.
Since 1985 she dedicates to the research studies of light, color and symbolic expression of thought.
In 1994, she was appointed for the three years from 1994 to 1997 full member of the diocesan commission for the Sacred Art of Bergamo.
His works are in public and private collections in Italy, France, Switzerland, England, Holland, Belgium, Canada, Japan, Australia, Malawi, Israel (Jerusalem) and at M.A.C.S. (Museum of Art and Culture Of Sacred Lombardia- Roman Bergamo -Italy).

1958 she began her artistic education addressed to classical composition in the studio of Master painter and fresco painter PASQUALE ARZUFFI, paternal uncle, in Bergamo.
1961-1963 she attended a complete drawing training as a fashion designer, organized by the Istituto Marangoni in Milan and hold in Bergamo, sponsored by CONSORZIO PROVINCIALE per L’ISTRUZIONE TECNICA di BERGAMO, she graduated in 1963.
1967 under the guidance of Master engraver IGNATIUS NICOLI in Bergamo she learned the art of engraving.
1975 in the studio of Maestro Professor PIERO URBANI in Bergamo, she continued her classical training while making the practice of ancient painting and painting and wood restoration.
1977 - 1978 - 1979 she perfected in figure drawn by attending courses organized by SOCIETA’ DELLE ARTI BERGAMO.
From 1985 she devoted herself to the research studies of light, colors, of symbolic expression and conceptual expression.

2010 Italy - Rome
Interview by RAI-1 and RAI-2 on "Mysterium" works,
exhibited in the church of Saints Bartholomew and Alexander
Piazza Colonna in Rome