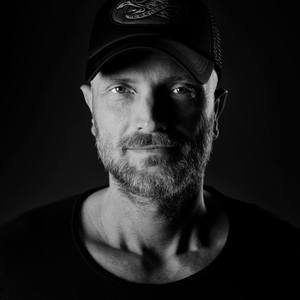 After completing his study in graphic design in Eindhoven, the Dutch artist Donald van Schilt (1972) has worked at several advertising agencies as graphic designer and later as an art director. Since 2005 he is a co-owner of Frisbi, an advertising/ design agency in Eindhoven.

Next to his work with Frisbi he also makes art.

Architecture, muscle cars, typography, tattoos and icons from the past are Donald’s main sources of inspiration. These elements can be detected in his collages, which are a combination of different images and materials that form a semi-abstract composition.
Rough coarse textured “urban” charisma characterizes his work and the use of materials such as paper, cardboard and wood gives his mixed media work its authentic character.

Donald uses the Mac as the foundation for his art. Image materials are digitally combined until the right composition is achieved. For the final version he uses different techniques such as print, graffiti, screen print and acrylic on canvas.