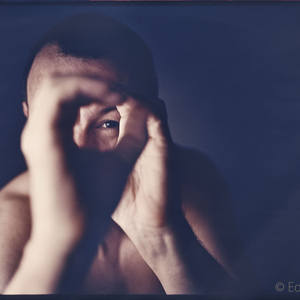 His work is regularly sold as book and music album cover sleeves and featured in magazines and newspapers around the world.

Edward Olive is a self taught fine art, wedding & portrait photographer based out of Madrid, Spain.

Edward Olive was a commercial litigation lawyer in London & Paris until throwing in the towel to pursue his more artistic interests. Edward got into photography by chance only in 2005 when he purchased his first camera, an entry level digital reflex Canon 350d to shoot his own actor’s book on a tripod with remote control. Finding he enjoyed the experience he started shooting actor and musician friends and the people living and working in his neighborhood Chueca (Central Madrid’s equivalent of Soho or Le Marais).

Dissatisfied with the focused perfection of modern digital images and seeking an alternative look for his pictures he started adapting analog lenses (he extracted from broken old cameras with a large metal hammer we understand) onto his digital reflex using masking tape and built DIY lighting from microphone stands, disco lights and Kelvin correction gelatin discarded by technicians on his acting jobs.

In autumn 2006 he bought his first film camera, a 1980’s Russian point-and-shoot (a cult Lomo LCA) using some very expired color film they were throwing out of the local photography store. Delighted with the dreamlike qualities and vintage colors, he hasn’t looked back. He continues to shoot almost exclusively analog cameras, still preferring the oldest expired film he can find, shunning the contemporary digital post-produced Photoshop look of current commercial and fashion photography, in favor of the grittier, earthier, unpredictability of expired film whether color negative, slides, black & white or Polaroid type instant film. Edward freely admits that it wasn’t until he bought his first Hasselblad in 2007 (the classic V series 500c/m with Carl Zeiss lenses) that he really found his instrument of choice. He still uses other cameras for reasons of variety, speed, ultra fast lenses or the discretion and convenience of a 35mm compact camera but takes a pair of V series Hasselblad 6×6 cameras, Mamiya M645 1000s and wheelie bag loaded with 120 & 220 film backs and inserts, as he says, when he really means business.

Edward’s pictures range from street photography to nudes, often combining his location wedding travel to shoot personal projects inspired by the new places and people, admitting he still takes more photos for himself just for fun than he does to try and sell later to clients, taking some consolation from the new ideas that come from expression, reinvention and experimentation, free from any commercial pressures, that can later be applied at work to put food on the table. Edward aims to project in his work the contrasts and contradictions that exist within him and within people in general. He wears Italian silk suits to work but takes some shots that step out of line. He uses perhaps the world’s best cameras and lenses yet feeds at times them with the worst Chinese made “black & white” film that has in reality neither black nor white dreamy red blurred images. A combination of the perfect public image and internal private thoughts that combine to make up the people we are, conforming and breaking society’s norms. His aim is to one day attain the vocal control of Pavarotti yet to turn it on its head “Sex Pistols style” refusing to sing correct notes.

Ironically Edward has said from his earliest years he never wanted to get married himself, even admitting that just seeing the grooms standing at the front of the cathedrals with everyone looking gave him a cold sweat until photographic matters got him back to thinking shutter speeds on the little kids running around at the back of the congregation and the inadvertent rising up of female guests’ dresses. Recently there has been a slight softening of his hard line, stating that if he ever did get hitched it would be as Elvis in Las Vegas with the bride as Marilyn on YouTube with only one photo taken, preferably of the bride and preferably without all her clothes, which would be the role of the only guest.