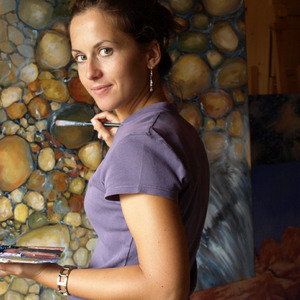 She was born in Spormaggiore - Northern ITALY in 1980. She's a painter of the Dolomites, in Trentino, where she still lives. She's known for her mountains landscapes, but overall as a "Painter of the Water": her mind and soul used to mingle themselves with the more little and simple shape and colors of the nature all around her.

"Nature has always been an inexhaustible source of inspiration for art since man finds in it those laws that belong his own as he's "nature" himself. This truth is perceived by the painter Elisa Zeni, thanks to the rare gift of a sensitivity through which she can enter into spiritual and physical resonance with natural elements and let transfer her most intimate sensations to the canvas. She loves everything about nature: flowers, meadows, mountains, stones, but she is overall fascinated by water, the most common substance and, at the same time, more mysterious because of its iridescent and elusive essence.
Without shape and color, the water passes from the liquid to the solid or gaseous state, taking on all forms and colors without distinction; it brings life within itself by going through endless metamorphoses that only a few are able to perceive and reveal with the language of art. It is no coincidence that, in Elisa Zeni's paintings, the boundary between figuration and abstraction is always extremely blurred because, more than by the objective representation of reality, she is driven by the need to manifest through the forms and the color the emotions that the spell hypnotic water - in all its manifestations - induces in its unconscious or, better said, in its soul."
From icsART 2019 N.6