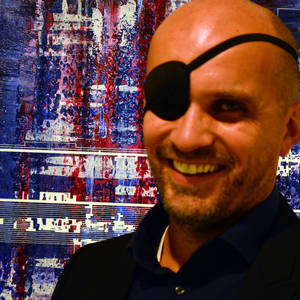 Eric Cornelis Bos is a professional visual artist and architect, born (1970) and currently living in the Netherlands. He is a very creative artist with a great passion for perfection and excellence. “I really enjoy and love the freedom of using all my creativity, ideas and thoughts in the creation of a new work of art. There is so much passion in every creative process that to me my works of art are truly works of the heart. I love my art and architecture.”

Through the combination and practicing of his talents in different creative disciplines he is seeing a synergistic effect that is bringing his creativity and creative process to a deeper level. Or call it higher if you will. A level that brings more insight, knowledge and understanding.

“My great passion for the different artistic disciplines has always been so great that there was nothing else to do then to step into them and just go all the way. The positive energy this produces will lead to new ideas, impulses and enthusiasm for every next step.”

For more information please visit his my websites or contact me.