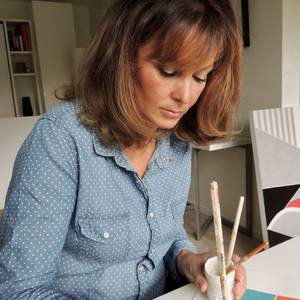 "I seek to apply constructive clarity and precise proportions to create works that are dynamic yet peaceful, structured yet free and which above all release positive energy.!"
Sylvie Hamou is a contemporary Swiss-French-New Zealand artist residing in Geneva. She creates unique abstract works, inspired by her quest for harmony and balance and her strong sensitivity to colour. Her search for visual coherence and careful colour composition is linked to her passion for design.
Her latest collection of works entitled "BETWEEN HEAVEN AND EARTH" is a conscious break away from her more obvious geometrical and structured contemporary paintings but highlights once again her love of colour and a skilful talent to combine and blend them together. While her geometric collection is purely abstract and a dialogue between lines, spheres and forms, with a signature dot work feature, her latest works are more figurative and subtle, recalling elements of the world around us - clouds, seascapes, landscapes, the sky... which she hopes will trigger the viewer's own imagination.

In her own words, " I want my artwork to have a stand-alone personality and to release positive energy. In this somewhat crazy, stressed-out world, my greatest pleasure is to hear that my work is appreciated for its innovative, contemporary style that is serene and optimistic. Just how life should be!"

Sylvie Hamou has just opened her own art gallery (Studio Art Unlimited) in the heart of the Old Town of Geneva /Switzerland. She holds numerous exhibitions of her work throughout the year and also invites other artists to showcase solo and group exhibits.
www.sylviehamou.com
www.studioartunlimited.com

Today, her artworks are in private collections worldwide including a large 4-piece composition in a luxury ski resort in Colorado/USA, a university residential hall in Brazil and other works in the foyers and offices of financial institutions and legal practices in Geneva Switzerland.

Over the last eight years, Sylvie Hamou's exhibition schedule has taken her all over the world and she has participated in solo and group shows in Switzerland, France, and throughout Europe as well as the USA and in particular Miami / Florida during the Art Basel seasons.
After a successful selection in an international online art competition in 2014, she exhibited a collection of paintings at JFK airport, New York via Embler Art gallery.

In 2016, she was invited to join Open Art Code, an association of independent artists curated by Studio Abba and was a part of numerous group exhibits held in prestigious venues around the world including Italy, Monaco, the Grand Palais in Paris and th Tokyo Metropolitan Art Museum...
She was extremely honoured to be included in the international juried selection of two art fairs (The Other Art Fair) in New York in Nov 2017 and again in London in March of this year. Her artworks are now in the homes of private collectors worldwide.

The major event of 2018, is the opening of her own art gallery "Studio Art Unlimited" in the heart of the old town of Geneva/Switzerland. An exceptional showcase among other prestigious art galleries.
www.studioartunlimited.com