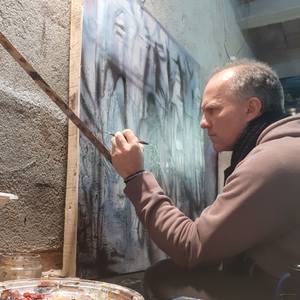 ‘Once I finish a work it may remind me of a cavernous landscape, the night sky with stars and galaxies, or an underwater scene, although to someone else it might may well evoke something completely different like a microscopic view of an insect, an aerial photograph of the earth or an alien landscape. I enjoy the fact that these paintings can be interpreted differently depending on the viewer, hence they are not static but have potentiality for change depending on who is looking. I believe they hover between abstraction and figuration and it is this space which I seek to explore in my work.’

Filippo Francocci was born in 1974 in Città di Castello, Italy. When he was 2 years of age his family moved to South Africa where he grew up and obtained a BA in Fine Arts from Wits University in Johannesburg. After his degree he moved to Europe and lived in London and Rome. He now lives and works on the Costa Brava in Spain.​