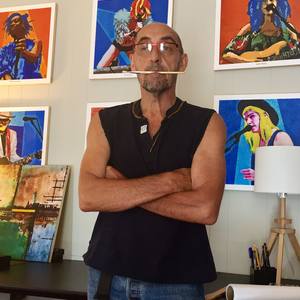 Frank Trocino – Artist Biography
Based in Austin, Texas, Frank Trocino arrived at his career as an artist after several unexpected detours. Trocino first set his sights on a career in architecture. Even at a young age, his favorite toys were Lincoln Logs, American Bricks, and an Erector set.
Trocino achieved his goals, working as an architect for the first decades of his career. He recalls the satisfaction that came with the drawing and presentation of designs, and in identifying the beauty of a well-executed set of construction documents.
But a departure from the world of architecture and a series of misfortunes coupled with some bad decisions led to the collapse of everything Trocino had accomplished. At the age of 45, he lost it all: his wife, his house, and his business.
Starting over again was a daunting task—something he never thought he’d be facing. He knew he could look at his losses as the mark of ruin, or as a blank canvas—an opportunity to create his life from new beginnings. This is when Trocino turned to art. He knew that painting—a lifelong hobby—was a direction he needed to follow.
He took it slowly, careful to establish a groundwork on which he could succeed. With all his belongings in three suitcases, he moved to Saudi Arabia. Working as an architect by day, he used his off-hours to develop his art practice. “There is a lot of idle time in Saudi Arabia,” Trocino explains. “No dating, no movies, no parties, no alcohol, and few recreational activities.” It was the perfect environment to draw a new vocation for himself.
Upon returning to the US, Trocino made his way to Texas (via Portland, Oregon), and now focuses on art full-time. Many of his paintings focus on the built environment, returning him to his early love of architecture. In this way, he has come full-circle, finding in his surrender to art a new vitality to life.


Frank Trocino – Artist Statement (Why I paint what I paint)
I define my style as mid century pop cubism. I have two subject matters that I paint at this time: couples and architecture. I paint couples because I find myself reflecting on what is important, especially in these challenging times of isolation and uncertainty. People are often wanting for things that are out of reach or have an implied social status - fame, fortune, a vacation home in Fiji. For those in a relationship, the source of eternal happiness could be right in front of them. But my couples work is really about epic fantasy: the layering and depth of emotion and tension. And on the subject of fantasy, each painting comes with a brief excerpt from a fictional back story that I pull from the depths of my imagination. It acts as sort of a plausible scenario which prompts the viewer to use their imagination and hopefully come up with their own story..

My semi-abstracts are inspired by architecture and the built environment. I believe that buildings have souls and personalities. They evolve from the hand of the designer and the inhabitants that have been sheltered by the walls and ceilings over the life of the building. And again, I usually introduce a story to go along with the piece. I don’t expect the viewer to be satisfied with my story, instead, I would rather them make up their own.

Stylistically, I am influenced by the innovative work of Georgy Kurasov, M. F. Husain and Roy Lichtenstein. I also am influenced by the great magazine illustrators of the 50’s and 60’s such as Coby Whitmore and Jon Whitcomb. I’m drawn to the freedom and energy of cubism and have spent countless hours soaking in the works of Braque, Gris, and Picasso.

Process
Unconventionally, my paintings start as hand-drawn digital images using the app “Procreate.” From this I print a basic template on fine art paper. The entire surface gets over-painted with ink, watercolor and acrylic paint, followed by three coats of archival varnish to seal and preserve the painting. Finally, the piece is waxed and laminated to a cradled wood panel. It is ready to hang, or may be framed if desired. The finished piece is a hand embellished archival print l