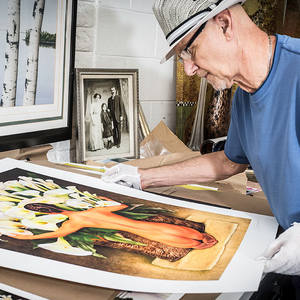 I never set out to be a photographer. I really wanted to be an artist. I distinctly remember my parents saying something like “how are you going to make a living as an artist? Drawing pictures on the sidewalk?”

It was nearing the end the Mad Men era and the advertising business was changing, creativity was now king. Commercial artists were now called art directors. Agencies now wanted people with ideas not drawing skills. Fortunately I was pretty good at ideas and not that good at drawing. I won a lot of awards, made a bunch of money and my parents were extreamly happy that I wouldn’t be living in my car. //////////////////////////////////////////

My boss and creative director Carl Fawlor handed me his Nikon F. I remember what a beautiful piece of machinery it was and that it weighed as much as a cinderblock. Carl told me that as an art director I’d be working with some pretty good photographers, so I better start learning photography so I could direct them. Actually I took a different approach, I picked all their brains.

I’ve now carried my camera for almost fifty years. And in that time… I guess I became a pretty good photographer… without even knowing it.
////////////////////////////////////////
Harry John Kerker is a Los Angeles based fine art photographer. He developed his style working with some of the greats of photography, such as Sebastião Salgado, Robert Farber and Reid Miles. He is the recipient of over a hundred national and
international awards for his work and recipient
of an Emmy nomination for television.
He shows in the US and Mexico and his work
resides in international collections