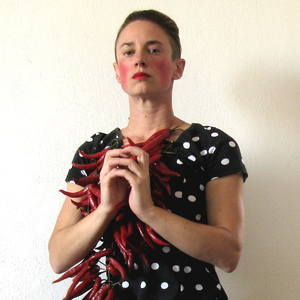 Irene is a full time professional artist born in Siena, Italy, the 14th of August 1982. Self taught painter, she developed her skills during years of experimentation. Her collectable and unique style of narrative portraiture, with rosy cheeks and big almond eyes characters heavily influenced by pop culture and kitsch, recently caught the attention of international collectors and galleries. In 2018, Irene was invited in Ciudad Nezahualcòyotl, Mexico, for her first solo exhibition outside Italy. On the same year, she was one of the winner of the Gallery Awards for being among the “excellence finalists” of ART Revolution Taipei International artists Grand Prize Competition, and was awarded with the invitation to show her paintings at the International Artists Salon at ART Revolution Taipei 2019. Her work has been exhibited in Italy, UK, Mexico, China, Taiwan, Russia, USA and Austria and features in public and private collections all over the world.

"I am a woman and this is my legacy"
4-19. October, Laura I Gallery
London,UK