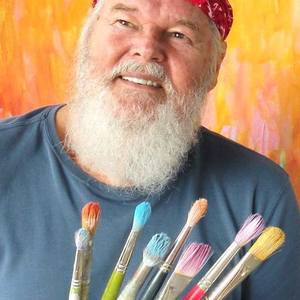 I have a vision. It's to do with the last great frontier between our world and the world of the fourth dimension, the spirit world. Of course all art is spiritual. However since childhood I was somewhat open to the spirit world so that today my paintings are inspired by dreams and impressions of a sort of universal cosmic heart expressed as a kind of longing for a world of love and peace for all humankind. I feel very optimistic that that is the direction our world is moving towards, despite contradictions to the opposite. Through the medium of color, form and texture I am trying no less to make the invisible visible, and as with so many wonderful artists today I do believe such a thing is possible.

Jan Parker was born in 1941 in Southport Lancashire England, to an English father and a Danish mother. Jan began to draw caricatures of his family at age 4. He later graduated from Willesden school of art, London. In the early 1960's Jan was a cartoonist on a Copenhagen newspaper in Denmark. He returned to London and joined artist partners. The American film director Stanley Kubric invited Jan to create drawings and paintings on the set of his famous movie " 2001 A Space Odyssey " and became a collector of Jan's paintings. In 1980 Jan moved to New York where he painted along the Hudson River. The artist moved to Hawaii in 1985, for the next 27 years Jan held art shows in Tokyo Japan and later in Korea and China. His work is collected in museums and institutions in Asia, America and Europe. Jan Parker has many private collectors the world over. Today Jan lives with his Japanese wife in Kona on the Island of Hawaii.