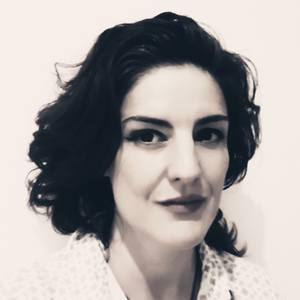 NON-CONFORMAL by nature, she since early childhood confidently rejected any form of Academic mainstream education.

From 1999-2004 Jeanne Ricketts assisted and painted exclusively on a regular basis at "Castel Caramel” in Monti (F) with surrealist and visionary artist Ernst Fuchs, who during his life-time worked with Dalì and Hundertwasser.
In those years she also mingled with Razzia, the official LVMH Poster-artist, via whom she discovered common affinities for vintage and the Dolce Vita, which later influenced her concept SWAY®. —

In 1996 Ricketts graduated with awards from Brittany's Murals and Art Déco Master of its time, Yannick Guégan, whom’s remote Institute was by the Atlantic Ocean in Quimiac-Mesquer (F).- During four months of high-intensity studies of secret techniques you could find no equivalent in the World, Ricketts experienced one of her first breakthroughs. Whilst painting her very first large-scale “OceanSky” all students stopped to watch her paint, to the greatest surprise of her Master and herself.


1994-1996 Ricketts lived her first romantic island-life from the Greek medieval town of Rhodes. There she initiated her autodidactic mural-collaborations with local international architects, whilst studying Byzantine iconography under Eva Vlavianos. These biblical lines painted with Japanese brushes led her hand ever since.


1986-1994 Ricketts graduated in Arts & Fashion as a quadrilingual polyglot from Wald’s Art-oriented Boarding-school in Baden-Württemberg, Germany.

Jeanne Ricketts performs Live Worldwide on commission in partnership with international patrons and Art collectors endorsing innovation and CSR, and I am thrilled to count her amongst us at ESPRONCEDA since 2017.