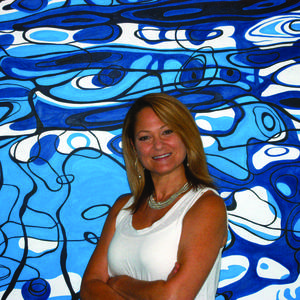 Julie Siracusa was born in the mid 1960’s in a small southern Louisiana town, Morgan City. At an early age she began drawing and creating collage pieces. By the time she was five, her mother enrolled her in her first formal painting class. The teacher told her mother that his class was not a babysitting service. Her mother responded with, “She’s not your average child, give her one class and you can decide if she is mature enough”. One class extended to the full summer session with Siracusa winning several awards for her early paintings.

Siracusa’s mother is an expert seamstress. Her creative influence gave her daughter the tools and support to create whenever she wanted to express herself. She knew she was an artist as long as she can remember. Creative expression is not just a desire, it is her way of life.

Siracusa’s father raced hydroplane boats professionally. The family would travel to the gulf coast and throughout Florida for the races. This is where she realized how much she loved water.

In grade school, when a project offered a venue for drawing and sculpting she would participate. One of these first opportunities was a science project. Siracusa chose dinosaurs. She sculpted T-Rex, Triceratops and a Brontosaurus and created a prehistoric landscape for their display. Her backdrop featured large drawings of these magnificent creatures with facts about their characteristics. She would enter every science and social studies fair and most always won best in show.

All of Siracusa’s school age years were busy with activities. From age four to nine she was a member of the local swim team which competed in swim meets throughout the state. When she was nine she began riding and showing quarter horses.

Siracusa’s high school offered art class as an elective. She called that her “hour off”. She enjoyed her academics classes, especially mathematics, but art class was her comfort zone. At the end of each school year she would be invited to the awards ceremony thinking it was for the art award. Each year she was surprised by the math award as well.

Because of her interests, college brought the study of architecture and fine art at the University of Southwest Louisiana in Lafayette. Siracusa’s time in architecture gave her the tools for problem solving for any project. This training paved the way for her to design and build her home, which is a centrifuge for her creativity. Her advanced skills in fine art allowed her to complete her 100 level courses and be promoted to 400 level courses directly after.

After college, Siracusa worked as a graphic designer. She took on freelance projects and began to build a client base. One of these freelance projects was window design for the local mall. Occupancy was low and the mall wanted the empty spaces to look fresh. Nine storefronts later and a couple all-nighters and the project was a success. Because of this project, the mall manager asked Siracusa to curate an artists’ group in a vacant space. It was called Artists of Acadiana. She organized openings with musicians from the local symphony orchestra and finger food from the food court vendors. Siracusa’s media contacts promoted the events at no charge. During this time, she was a guest on a Saturday morning radio talk show. One of the artists from the group would join her each week and have a little theater-of-the-mind talking about art.

In 1996 she started Siracusa Design and has specialized in branding companies with strong images that anchor them well in the business community. In recent years Siracusa has chosen to dedicate more time to her true passion, fine art, painting specifically.

Now we go back in time to see the inspiration for her current work. After college, her travels expanded from the US coast to Europe and the Caribbean. Most trips were planned on the water. From beaches to chartered boats hopping from island to island. Siracusa has been at home on the water since she was a child at the boat races. Water, as Siracusa’s subject matter, is a natural.

Island Love Rebuilding Fund
December 2, 2017
$2,000 raised with framed print of "Phosphorescent"
Funds go directly to the rebuilding effort of the USVI's in the aftermath of Hurricanes Irma and Maria.