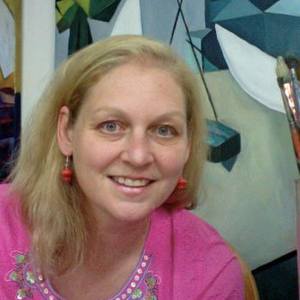 My work happens in series, sometimes the series is longer and lasts for years, and other times it finishes quickly. I like to go deep into an idea when I can, when it serves the work and helps to uncover and reveal, excavate truth and honesty and lay it bare. Expose it where it was previously covered or hidden. Sometimes these are social truths and sometimes they’re truths about myself, things I want to hide from myself and from others.

Each painting is an expansion of my previously expressed theses. Repetition is a big theme in my work (repeating images with or without variation), the taboo, fake vs. real, labeling, ubiquity, quotidian versus exotic, identity, anonymity, home, signs from the Universe. I am not able to keep my color very quiet and careen off into wild bursts of pigment. My work has a spiritual basis which I am simultaneously embarrassed and profoundly moved by. I used to fancy myself an intellectual.

Painting titles often come from song lyrics or song titles, and I don’t know if this is a cheap appropriation or an homage to another artist. I hope it’s the latter. I try not to impose too much of my own will on a work of art or on a series- usually if I get out of the way of the work and let the Muse guide me, the painting is more successful as a visual experience. Also it means that when I set out to paint waterfalls but the Muse wants to paint animals, I let her have at it.

Mostly I am grateful that I have been allowed to do this thing, this great thing called painting, and contribute to the world in any small way.

2009-2010 The Nairobi Art Centre
I conducted workshops in oil paint technique, with an emphasis on value identification and modeling.

2013 was the jurist for the Rosslyn Academy Fine Art Competition