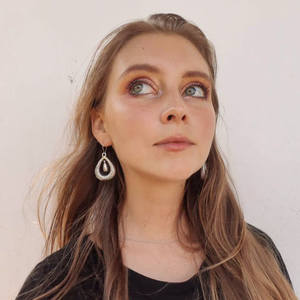 Khasanova Ekaterina. A film photographer and painter. Her photographs are not staged, they were shot on multiple-exposure film cameras WITHOUT USING PHOTOSHOP. Currently living in Indonesia, after one year already.
"I try to capture the perfect light, shadows and composition in a constantly changing world, to show harmony and tranquility in the chaos of thousands of lives. The present moment finds eternity in photography. To create my art works I am inspired by: garbage, landfills, ancient architecture, temples, churches, travel, small villages, slums, national cultural holidays, ceremonies, schools, abstract contemporary art, French impressionists, flea markets, the elderly and eyes of Indian children.
I've had meaningful travel experiences in my life and now, during the pandemic, I'm leading a "slow life", enjoying it in the "hygge style", meditating, and doing art. Art is the one thing that I can't not do, I've already tried. This is my reflection." - says the artist about her works.

Katya was born in a small and cold Siberian town of Russia to a family of doctors and scientists. Her interest in art began from early childhood: At the age of 3 Katya's mother sent her to an art emphasized kindergarten, she graduated from an art school with honors, attended courses at an architectural academy, graduated from an art college and then from the St.Petersburg Art University in 2017. While in St.Petersburg she was a member of the community of young artists of the city, organized exhibitions as a curator and participated in exhibitions as an artist, studied in photography schools with leading photographers.

From the age of 13, Katya lived many of her years between two countries, Russia and India. Indian landscapes, people and culture strongly influenced her creativity, worldview, sense of color and light. The “human” with his inner world and his environment became the central figure of Katya's photographic works and paintings. There in India, at the age of 16, she began to engage in documentary film photography.

The following three years after graduating from university, Katya visited 20 countries, lived and worked for 2 months in an art residence in "la maison verte/ Marne-sur-sienne" in France near Paris, where her exhibition of photographs and paintings was held. In 2020 she spent 2 months in an art residency program of the Indonesian-Swiss urban gallery "Allcaps store" in Bali where her art is still being represented. Also she traveled with the Irish folk band "Tantrick Monkeys" throughout India over 2 months making 30 portrait life-painting performances, 1×1.5m each. She lived for a month in Amma's ashram studying meditation and participated in 2 seperate 10-day courses of Vipassana.