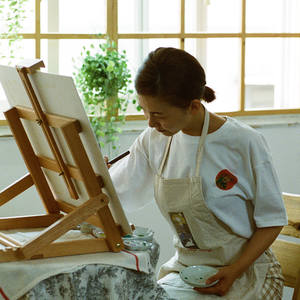 Kim HyunJung debuted as a model and actress in 1999, and appeared in TV dramas, films, and theater until 2009. While working as an actress, Kim studied art history, art theory, artwork appraisal, and painting. From 2009 when she was on a break, Kim received psychology consultation at the Catholic Consultation Volunteer Course for more than one year, and met her inner child “Lala” through the doll therapy.

BA in English Language and Literature.

From the experts in each field in China,
she received traditional painting, calligraphy and connoisseurship education by apprentices.

Now Kim is painting, CPBC (Catholic Peace Broadcast Radio) 'Morning to Happiness' is on the radio on the last Friday of every month.

She is currently working at the CPBC TV 'books, movies and stories'. https://youtu.be/t3VTCIxc_Kk

In November of the same year, I participated in the invitation exhibition "One to Three, One Part Three: Korean Artist, Three Days," at the Invitation Exhibition of the Museum of Contemporary Art in Beijing, together with the late Nam June Paik and Iwajong Painting.

In 2016, the Korean Cultural Center in Beijing and the Paju Pilgrimage Gallery in Paju National Reconciliation Center in August participated in the invitation exhibition "书道无门: The Art of Interchange of Korean and Chinese Calligraphy in 2016".

In October of the same year, she have been invited by Gallery 1898 (Old Peace Gallery) in support of Catholic Church Seoul National University Public Relations Bureau : Solo Exhibition "gift".

In December 2018, Kim had a solo exhibition : "Small Happiness " at Gallery Harang.