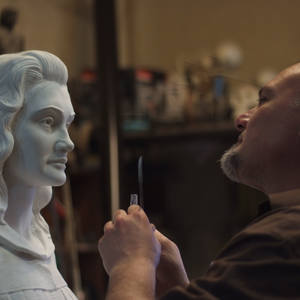 Krasimir Krastev-Lomski is an established Bulgarian sculptor in the field of small sculpture. He has graduated from the National Academy of Art in Sofia, Bulgaria, with a major in sculpture and subsequently acquired his hands-on experience in the studio of the famous Bulgarian sculptor Georgi Chapkanov-Chapa.
Krastev works in the field of small sculpture with care to the fine, jewelry-like details and his works are a unique interpretation of the traditional realistic sculptures of the old masters. His sculptures predominantly evoke a fantasy feel, characteristic of fantasy realism, but at the same time contain a reference to antiquity.
The sculptor’s works are figurative with a distinctive inclination to realism. They emanate the feeling of a living being from flesh and blood, sculpted elegantly and with great precision.
A great part of Krasimir’s works are based on images inspired by the Antiquity. Some of them are Zeus, disguised as a bull ridden by the young and frightened Europa, the devilish Satyr playing his double flute, called “dvoyanka”, carried away in a magical dance, which lures the beautiful Bacchante to follow him, spellbound by his music.
Another preferred topic embodied in the sculptor’s work is the animalistic one. Like his predecessors in the field of sculpture art, Krasimir does not just seek a realistic representation of the wolf, bull or the leopard, but rather reincarnates the image of the totem animal. The animal images he creates are not stiff and static, they carry the free spirit dynamics and energy of the wilderness.
Krasimir is the author of the first in the world monument of the rock legend Ronnie James Dio, erected in the Bulgarian town of Kavarna. He has also completed a number of socially important projects.
Krasimir Krastev’s works require within 4 to 8 weeks to make. Every piece of his fine sculptures goes through several stages of creation – modelling, casting in metal and refining. A distinguishing feature of a great part of his hand made sculptures is their jewelry like quality, and every single one of them is created with great care to detail. The sculptor does not compromise with the quality of his work, and many of his creations are in the collections of art lovers around the world.

Born August 19th, 1974, in the city of Lom, Bulgaria
Graduated from the Sofia High School of Fine Arts “Iliya Petrov”
Graduated from the National Academy of Fine Arts, Sofia, with a major in Sculpture
Worked in the atelier of Georgi Chapkanov from 1995 to 2000
Associated member of the representative branch of the Union of Bulgarian Artists in Lom since 2001.
Author of the first and unique monument of heavy metal music icon Ronnie James Dio which has been unveiled in Kavarna, Bulgaria in 2010