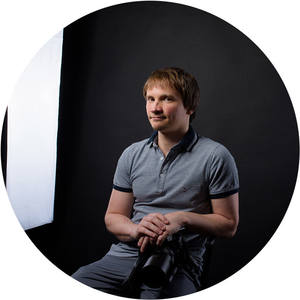 Mikhail Ray is a Ukrainian artist whose work examines the relationship between perception, Surrealism and empiricism. His creative process involves taking photographs with a digital camera and manipulating the results using computer software,

combining disparate elements to create unexpected hybrid images. Drawing on techniques such as photomontage, digital drawing and collage, he updates the tropes of Surrealism for the digital age, utilising the visual language and style of the movement to pursue his own vision.

Mikhail used to be a merchant navy officer, a role that offered him the opportunity to travel and photograph landscapes using traditional techniques. However, he later realised that the beauty he was trying to capture was not intrinsic to the landscape, but subject to his own perception, which was constructed both through social conditioning and the physical capability of his eyes and brain to form images.

It was this understanding that prompted him to start travelling inside his own mind in search of beauty, using the principles of meditation and contemplation to explore the particularities of his own perception. The artist sees a correspondence between the Surrealist movement and his formulation of the subjectivity of beauty and perception. As he puts it, "the language of Surrealism is similar to any foreign language, but with one major difference - nobody can teach you to speak it, every Surrealism is personal."

For Mikhail, the visual tropes of Surrealism offer an important channel for exploring personal perception and an empirical understanding of the world based on the senses, rather than following traditional and socially-constructed formulations. The senses play an important role in his visual world: disembodied ears, hands and tongues point to how sensory perception drives our acquisition of knowledge in a highly subjective (and limited) way.

His aesthetic language is inspired in part by his experiences in the navy. Images of water appear in many forms throughout his work: swelling as the sea, frozen as ice and vapourised as cloud. His images are often characterised by fragmentation, distortion and deconstruction, and this also echoes the artist`s creative process. He takes an active role in each stage of production, only using photographs he has taken himself which often incorporate macro objects or items he has sculpted. However, the main emphasis of his practice is not shooting images but the process of manipulating them digitally, exercising total control over the final image.