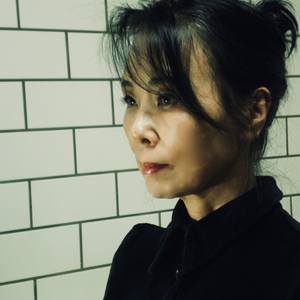 Motoko Matsuda develops universal and diverse themes. She is particular about lines and begins to draw lines first in both of her colorful works and monochrome ones. She considers the balance of lines and colors and advances her work in a direction that harmonizes the space including the surroundings of the work. She wants to create artworks that reaches people's hearts.

Biography :
She was born and raised in traditional hand painted kimono textile artists' family in Kyoto city, Japan. There are many traditional and modern museums near her home and visited there well. Also children's picture books were her favorites and American animations and dramas on TV. So many cultural feelings penetrated her.

Her career started as a textile designer for Paris and NY haute couture in the textile design company and next entered a German textile designer's studio as the same occupation.
After that as a freelance, she set up her studio in Aoyama, Tokyo, created many illustrations and art works.
Creating artworks and held many solo and selected group exhibitions in inland and overseas since then.

Award : I was given The Certificate of Excellence in mixed media part from Artitude which was a world wide art competition in NY,'89. The curators of it were from Fog Art Museum, Chicago Museum and other famous American museums.