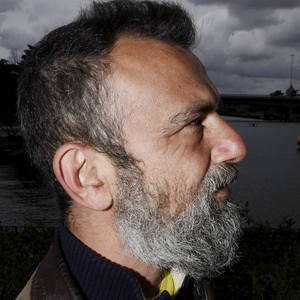 Onze (Stefano Centonze) lives and works in Rome, where he was born in 1967. He has a degree in painting from the Rome Academy of Fine Arts and has been publishing his illustrations since 1988. In 1989, he began collaborating regularly with the daily newspaper Il manifesto. Numerous illustrations have appeared in Dolce Vita, Vanity, Rockstar, Gambero Rosso, Blue, Nessuno tocchi Caino, Internazionale, Linea d'ombra, Alias, Musica!!!, Bravacasa, Urban and the Italian daily mass circulation newspapers Corriere della Sera, La Repubblica, Liberazione. In 1998, he received the annual award Lo straniero by Goffredo Fofi's quarterly publication of the same name. In 1999 he became the illustrator for the monthly publication Fuoriluogo and in 2001, for the weekly Donnamoderna.
His graphic and pictorial work has been exhibited in Genova, Parma, Rome, here among others in the collective exhibition Nouvelle Graphique Romana sponsored by the Municipality of Rome, and in 2009 in Tokyo, where the local Institute for Italian Culture hosted a personalretrospective of his work.
His illustrations have been used in advertising campaigns for the Roman Summer cultural programme in 1998, Renault Clio (both by Saatchi & Saatchi), Toscano Immobiliare (by Young & Rubicam) and Noi Donne (by Ambrosio & Maoloni). He has also designed bookcovers for the major Italian publishers Mondadori, Feltrinelli. He is also the illustrator of the bookcovers of the "Contromano" series published by Laterza.
In October 2016, he accompanies pianist Alessandra Celletti with his animations, in a tribute concert to Erik Satie for the RomaEuropa Festival. From this project, the CD+DVD Working on Satie is released https://alessandracelletti.bandcamp.com/merch/working-on-satie-cd-dvd-celletti-onze
Various techniques such as pencil, acrylic paint, collage, photography, paintbrush and computer are combined in his illustrations. He always begins his work with a hand drawn sketch on paper, even when digital instruments are then to be used. Among the artistic influences amalgamated in his own unique and original work are expressionist painting, pop art, comics and posters.