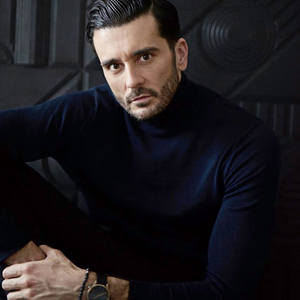 1979 born in Warsaw, Poland
Lives and works in Milan, Italy.

Both his aesthetics and art technique arise from many experiences. In 2003 he graduated from Cardinal Stefan Wyszynski University with a Master of Psychology. For many years he was working in fashion industry, leading, among others, his own jewelry brand. After completing courses in Interior Design at Academy of Fine Arts in Warsaw he moved to Milan, where he started working in this field for some Italian architectural studios. In the meantime his passion for art was growing and gradually became his only occupation. Today he sells his relief paintings all over the world.

Looking at subtle, minimalist spatial paintings of the artist and interior designer Paul Bik, born in Warsaw and currently living in Milan, one can easily observe in them the presence of the Italian architecture. The Italian postmodernism of the 50s and 60s is for Bik an endless source of inspiration. Deeply moved by the postmodern buildings' forms, in his works he influences the viewer with a geometric structure, multidimensionality and synthetic forms, as well as a very restricted colour range. Nonetheless, Bik's work, same as the architecture of postmodernism, is not deprived of a certain dose of a refined decor. Art performed by Bik strongly influences the viewer's emotions with its ambiguity, combining both the intellectual and the emotional. Another feature linking Bik's paintings to the pieces of Italian postmodern architecture is their eclecticism – often because the young artist compiles different types of paints (acrylic and oil) or finishes (matt and shiny). The artist successfully manages to transfer to his paintings the spatiality proper of architecture, and consequently, to give them a three-dimensional character.

Paul Bik is also considered a continuator of the spacialism tradition in contemporary art. Inspiration for his paintings can be found in the spatial works of artists such as Lucio Fontana, Agostino Bonalumi or Enrico Castellani.
Although the main elements of the Paul Bik's artworks are geometric forms of simple, harmonious, rhythmic patterns of straight and circular lines elaborated with craft precision, in his compositions the light and shadow seem to play a central role. Therefore, the fact that he uses a limited colour palette seems justifiable – the colour in this case primarily functions as the background for the exposed light and shadow. Although his subtle work – with its ascetic use of colours and minimalist forms – emanates with a sense of harmony, this serene and peaceful atmosphere sometimes surpasses in confrontation with one distinct, colourful accent.

Bik achieves the effect of three-dimensionality thanks to using his own technique – the method of accumulating the layers of glued and stained cut cardboard, wood or paper into a mass of simple, geometric forms. Relief gains its extreme durability and flexibility during the process of fixing it with resin. In the final step, Bik reaches for the traditional painting tools, such as paintbrush and paint, giving his spatial constructions a monochrome complexion, or enriching the ascetic composition with a distinct accent, such as a shiny golden colour.