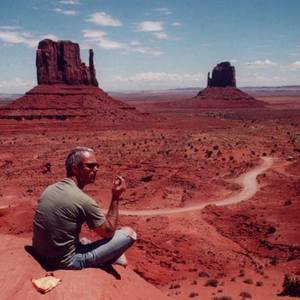 Guido Prussia was born in Genoa 50 years ago. He wanted to become a singer, poet or musician but a twisted fate led him to become a journalist. In a quest to find the better side of this profession, he started to shoot documentaries between the U.S.A. and Australia. He worked in Italy for 20 years, until he decided to move to the United States. His most successful TV program was “Hotel California”; he won't tell you what his least successful one was, but it was the only program abruptly terminated during a commercial break. It was back in the days when a sadomasochist spanking filmed in a shady night club in Berlin could still create a scandal. He wrote several books, but the one he believes to be his best is kept in a drawer; he wants to ensure he has a chance for a posthumous success. His last documentary is called Road to Hollywood and tells the story of a coast to coast trip, from New York to Los Angeles, together with his two best friends: his dogs Baby and Jack. His latest idea has been to dedicate himself to art, ignoring his father's advice from way back when. He likes to play with reality, mixing sacred with profane, old and new, farce and tragedy.