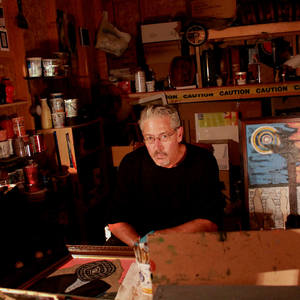 Michael Taav was born in New York City. He is a painter, sculptor, photographer, writer and filmmaker who began painting in 1999. What little he knew at the outset, he had learned from observing his friends, Grant Drumheller, Katherine Sherwood, Joanne Landes, and Betsy Rosenwald. In 2006, seeking seclusion, he left the city and moved to "the styx of Wisconsin" where he could experiment freely, discover tools and techniques, make a few "fortuitous mistakes" and ideally, progress more rapidly.

In the years preceding his move, Taav had worked as a cab driver, a feature film director, a house painter, art model, screenwriter, playwright, gardener, tutor, author, university professor, telemarketer, door-to-door salesman, journalist, tennis instructor, tennis hustler, script consultant, dramaturge, ghost writer, guest lecturer, warehouse worker, and essayist. Since 2006, he has supported himself through the sale of his paintings and the royalties from his films, plays, books, and screenplays.
He began exhibiting some of his work on Pinterest in early 2015 and that December moved to Saatchiart.

Taav received a B.A. from SUNY Purchase and a M.F.A from UC Davis.

Michael has participated in Group Exhibitions at Columbia College (2004 and 2005) and Green Bay's Art Garage (2007-8 and early 2012). His first solo exhibition was at the NWT Gallery later in 2012 (July Through October). In 2017 and 2018 he exhibited photographs and prints of his paintings at the DAM Gallery in Green Bay.