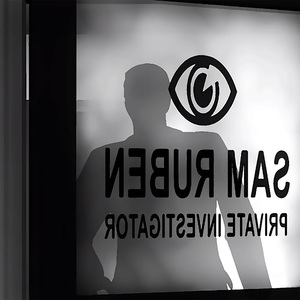 Sam Ruben is the collective name of a group of artists who jointly create images based on the Film Noir genre. They have been working together since 2000, and after the 2007 release of their cult animation feature, FILM NOIR, they have continued to produce expressive existentialist work based on the themes of the movie.

Film Noir images are meditations that feature the dark beauty of disillusionment and melancholy; they venerate the femme fatale while exploring themes of paranoia, claustrophobia, alienation from society and existentialist philosophy. Historically, Film Noir's shadowy images have always served as an antidote to cheerful social propaganda, which is why they continue to be relevant and sought-after today.

FILM NOIR images originally created for the movie -- which remains unseen in the US for copyright reasons -- are offered for the first time on Saatchiart as both open-edition prints on fine paper or canvas, as well as limited editions of aluminum panels imaged with 6-color SubiJet IQ inks.