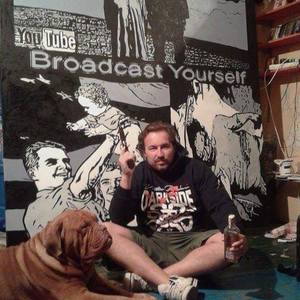 Dr Vladislav Scepanovic
(1971), graduated from the Faculty of Fine Arts in Cetinje in 1994, and completed postgraduate studies at the Faculty of Applied Arts in Belgrade. He gained his PhD in art theory and media in 2009 at the Interdisciplinary doctoral studies at the University of Arts in Belgrade, mentor prof. dr. Divna Vuksanovic. Founder and chief editor of the Art Association ART OF REALITY and founder of the artistic group HARD SOC. During 2013/2014, he was the acting director of the Museum of Contemporary Arts in Belgrade. He was president of the Board of 55 October Salon during 2013/2014. Now he works as an Associate Professor at subject drawing and painting at Faculty of Applied Arts in Belgrade. He is also Professor Art Theory on PhD studies at Faculty of Applied Arts in Belgrade and, at the Interdisciplinary doctoral studies at the University of Arts in Belgrade.
He is a winner of award for painting for 2001year “BELI ANĐEO / White Angel”, Mileseva 2001 He has been an active participant in the world of art since 1994 as an exhibiter, theoretician, organizer of art events and teaching art. He was participant at several round tables on art theory. He published the texts and one book about art theory and philosophy in important scientific journals and important publisher. He had over twenty solo exhibitions and many group exhibitions.
In his artistic work, Vladislav Scepanovic discusses the world of simulation and enduring forces of domination and resistance in the mass media. Basic motive of his work is the study of media scene representing the open display of the power of capital and the ruling economic and political structures.
He represents Serbia at the 57th Venice Biennale as part of the project Enclavia, May / November 2017