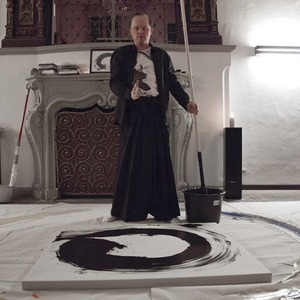 Wolfgang Semmelrock, was born in Austria in 1971 and raised in Germany. He lives and works in Vienna and in Chicago.

Coming from a background in architecture, he was particularly interested in experimental architecture and above all in inflatable structures and objects. He worked for artists like Jeff Koons and Gerwald Rockenschaub and soon developed and exhibited his own works. Inspired by geometrical structures, he started his career by creating inflatable objects such as the CUBE, which draw on the energetic and physical principals of life and the universe in general, at the same time exploring the invisible psyche and the unconscious mind. The onset of a myopathy caused him to intensify his search for self-awareness and to deepen his personal experience. His paintings are an expression of these processes which also inform his creative output. In Asian calligraphy, martial arts, ZEN meditation and archery, transpersonal psychology and art therapy he found the teachings to aid him in a better understanding.

In 2001, he held his first exhibition presenting and performing inflatable objects at the Museum of Contemporary and Applied Arts in Vienna, at the same time studying East Asian calligraphy with a Japanese ZEN master in San Francisco. These two forms of expression, painting as well as developing and experimenting with inflatable objects, are still dominating his artistic work today. His keen interest in painting brought him to the Zhou B Art Center in Chicago and resulted in an exhibition of his inflatables at the MCA Warehouse for Art Chicago in 2009. He continues to work in Chicago and to travel between the United States and Europe, exhibiting at home and abroad.

His inflatable objects are three-dimensional representations which have their roots in architecture, combined with the mechanical process of inflation. Diffuse forms are transformed into structured shapes, at the same time representing the search and discovery of analogies. In sketches, the artist researches physical as well as spiritual laws, which then become visible in three-dimensional space; thus, an object like the CUBE becomes an expression of geometric principles in life and the universe; the COSMIC EGG offers an analogy to alchemy; the ANGEL WINGS represents an analogy to the realms of the spirit and the psyche, the universe and the power of transformation; the LOTUS stands for the world of nature.

All of these objects have a strong and transformative impact on public spaces; the ANGEL WINGS are currently part of a photo series and a charity project in Chicago.

The paintings continue to explore and reflect upon the realms of conscious/ unconscious processes; they are the expression of a deeply personal spiritual experience - of the artist´s physical predicament as well as of his focus on energy and healing.

Furthermore, Wolfgang Semmelrock uses the principles of East Asian calligraphy to initiate interaction with his audience in so called „One Stroke Performances“, demonstrating his own "One Moment Painting Style" in happenings such as „One Stroke to Paradise“ or „Samurai With a Brush“.