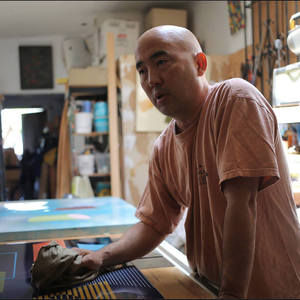 Bryan was drawn to music at an early age. Being musically inclined, he began playing French Horn as a child. He played in both the El Camino youth symphony and school orchestra.

Bryan, focused upon his musical expression, was continually seeking progressive techniques which lead to his interest in electronic music while in high school.

In his university studies at San Jose State and Sonoma State University, Bryan went on to study electronic music composition.

In 1988 Bryan then went to work for Sam Francis, the noted abstract expressionist painter.

A long standing and close friendship between Bryan and Sam's children had been established early on in childhood. This trusted relationship with Sam's family and close circle of friends would prove to be instrumental in the pivotal change of direction in Bryan's future.

Sam Francis invited Bryan to work as his studio assistant in Palo Alto where
Bryan would have the honor and unique experience of working side by side with this extraordinary artist. Sam would prove to be an important influence in Bryan's segue into painting, an incomparable mentor and a cherished friend to Bryan over the years to come.

In the late eighties I started working for him as his studio assistant in Palo Alto where he was painting a large commission for the new United Government building in Bonn, Germany. The painting was approximately 20 ft x 40 ft., a large mural.
I felt priviledged to be in the studio while Sam worked. I vividly recall helping him with buckets of paint and painting tools, taking photographs and archiving this period in time. It was truly an expansive experience working for Sam.

Sam moved me down to Los Angeles into his big studio in Venice where I had free access to paint, paper and canvas. I started painting. I picked up technical aspects of painting, and Sam's sense of freedom and release while he painted. I was captivated by his love of pure pigment and his vibrant palette.

Working side by side with Sam, I had the opportunity to absorb his knowledge and to instinctively understand his perspective. These are my roots which continue to flower and grow. I then interpret this in a unique way and build upon this foundation to create my own expression.

In my latest series I wanted to capture the feelings of location and identity with an emphasis on the unique architectural history of California. I reflect the relationships formed within the region between all its divergent cities and communities. I wanted to somehow express the complexity, diversity, and beauty of the region we live in as well as the sense of time that is felt as the city experiences its decay.

This new series of paintings uses round and rectangular shaped panels to explore, interpret and express the energy and flow of this thought process. The round panels are mandalas. These come from the perspective of looking straight up from a city street and seeing the tall buildings converge on a central point. The focal point is the center of the mandala. This viewpoint leads into abstraction as one loses their point of reference, everything turns on itself and the beginning becomes the end

The rectangles are more traditional landscapes with a view from the horizontal perspective where one can see a horizon line and the outlines and forms of buildings that identify a city. The foreground composition consists of colors and forms inspired by short glances, impressions, and photographs of architecture in the Southern California area. I try to contrast the idea of a fleeting unbalanced glance with the balance achieved in stasis.

I use negative space behind the forms to tell as much of the story as possible. The use of negative space for me is about finding a place to fit in; the relationship between what is there and what is not. It speaks of location. The composition is a balance between the negative space in the back and the forms and outlines in the foreground.

To complement these compositions, I've developed a technique that layers paint inside thick layers of epoxy, essentially isolating each layer from one another. This physical separation gives a sense of depth, volume and detachment again echoing the city theme.