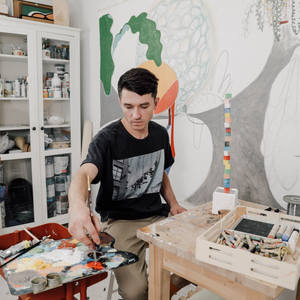 Igor Sokol (b. 1986, Ukraine) - is a painter currently living and working in New York, United States.

Focused mainly on oil painting, in his home studio in Ridgewood, artist actively experiments with different media and investigates 'other' methods of expressing himself.

Since childhood, discovering and harnessing new ideas has been his passion. While in the midst of achieving his degree in Fine Arts & Graphic Design, Igor worked as Graphic Designer for several companies in his home town. However, reiterating the same patterns and color blocks was not satisfying his mission for creative exploration. Once he moved to New York City at 21 years old, he found this priority fulfilled by pursuing painting.

Sokol creates art in the way he lives life – clarifying the everyday and considering deeper expressions of unchallenged commonalities. The concept of knowledge is just that, a concept, and holds more possibility than fact. Igor distills all things to their essential point, that which matters most. He envisions the form and its colors, then arranges the compositions in his own abstracted perception of concepts, ideas, and human experience. Igor investigates the many routes and methods of arriving at his focus: simplicity and dimension.

Artist seeks the balance of dualities by exploring the unity between form & formless, light & shadow, and space & matter. His work calls into question that which is deemed ‘knowledge’ and creates destabilization in notion of one’s understandings. The ‘possible’ eradicates itself of nervous uncertainty as existence is expressed in a weightless reality of balances..

When painting, Igor enters the realm of exploration where ideas find revelation in the infinite depths of potential reality. Each painting shares a frame of insight into the unknown where reality shares itself as question, not answer