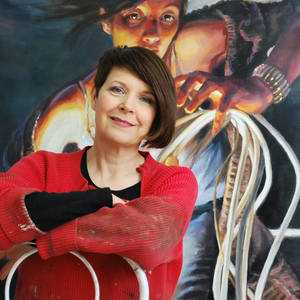 As a hypersensitive eleven year old, Aerfeldt escaped to her father’s shed and started making oil paintings on scraps of cardboard as a way to be seen and heard.

Growing up, Aerfeldt detested dolls because they represented the ‘perfect child’ - a mould, a trap.
Now these same dolls, figurines and mannequins, as well as young women inspired by old master paintings, inhabit her artworks. But they’ve been upscaled into bigger, better and enhanced versions.

Aerfeldt is a visual storyteller - the heroine’s journey is her main theme, and the ups and downs along the way form the chapters. There’s a yearning to make things better, to fix and repair what’s broken.

She makes artworks for people who want more; who believe there is more - fellow travellers on the journey.

Chris Aerfeldt is an Australian born painter.
Growing up in Adelaide to Estonian parents, she has lived in France and Spain for the past decade.

Aerfeldt’s artworks reflect her longing for freedom and the daily struggle towards authenticity. Masks, pretence and role-playing are key themes, all from a female perspective.

She was awarded the prestigious Samstag Scholarship for overseas study in 2007, and gained her Masters in Fine Art from Chelsea College of Art in London.

Exhibiting internationally for twenty years, her work has been shown in galleries and museums in the UK, Australia, France and Spain.

Aerfeldt’s paintings are held in public collections, including the Art Gallery of South Australia, Artbank Australia, and The University of the Arts, London. High profile London collectors such as Charles Saatchi, David Roberts and Robert Devereux have acquired her works.

She now divides her time between the south of France and Barcelona.